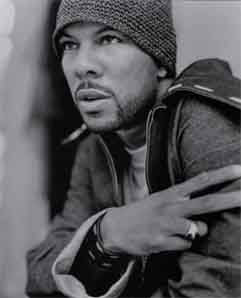 Common was born on the south side of Chicago as Lonnie Rashid Lynn Jr. His first stage name was “Common Sense” and stated as an underground rapper. Because of the band “Common Sense” he was forced to drop the “Sense” from his name. Common was not like every other rapper out.He was lyrically untouched. He was poetic and thoughtful though out his songs. His first Debut album was Can I borrow a Dollar ? which came out in 1993.

His next was , my personal favorite,  Resurrection, it was released in 1994.  It feature the single ” I Used to Love H.E.R.” In the song ” I Used to Love H.E.R is lyrically genus. H.E.R is an acronym for “Hearing Every Rhyme”. The song speaks about his love for this women that he met a young age. The women goes through appearance and personality changes like how she was underground then afro centric then how she went to the West coast stated hanging with “the boys from the block” then how the “man got to her” hanging with gangsters.  The gives it up at the end of the song about how the song was all along about hip-hop.  The song expresses how rap evolved but he explains how its moving in the wrong direction. The music was no longer about black pride and love but now gang banging and slinging drugs ,Smoking and getting  drunk .It a plea to the current rappers to to make the music real and genuine again.

He then relocated to Brooklyn, he issued the album “One Day Ill All make Sense” it featured many prominent artist including Erykah Badu, the Root’s and Lauryn Hill. This album much popularity which landed him a major-labor deal with MCA. His next album was “ Like Water for Chocolate” in early 2000. Some singles include “The Sixth Sense” and my favorite ” The Light”. The Light received a Grammy nomination for Best Rap Solo Performance. In 2003 Common won a Grammy for Best R&B song for “Love of My Life” with Badu. In 2015 he created the album “Be” which featured Kanye West and John Legend.

Common crossed fields as he began to start to act. He was in American Gangster(2006), Terminator Salvation(2009), and Just Wright(2010) ,he also appeared on several episodes of the tv show “Girlfriends, and “Hell on Wheels”. In 2014 Common and John Legend won a Golden Globe for the song “Glory” and a Academy Award for the movie “Selma“.

Common is a personal favorite of mine because he dares to be different. While his generation of rappers started gangster rap speaking about selling dope and pimping hoes, Common stated true to hisself and is a true inspiration.  He uplifted women and called them queens and never out of there name. He wrote and promoted black love. He was not selling out for the money like other rappers. He was passionate about rap which is shown in everything he produced.