In recent years millennials have once again called attention to the fact that the white race are embezzling in our Black gold. Instead of appreciating our creative genius they have continuously appropriated our music, hair styles, and other aspects of black intellectualism and culture and placed a white price tag on it as if it was up for sale. While some may think it started with Bantu knots or dance moves, white commodification and appropriation goes back years. One of the biggest examples is rock music and Black blues. It is no surprise that one of the more successful “white” genres derives from the sorrow and sound of the Black population.

Blues as a genre was born during the turn of the century in the  Mississippi Delta and other regions of the south. In the Black community blues serves as a historical monument that continuously reminds us of the hardships our race faced during slavery and hereafter. Blues was used by the slaves to communicate, through long low moan like song that concealed messages. It later was used to demonstrate the soul of a hardworking Black person mostly created by sharecroppers or “dirt poor” Black Americans. Blues is comprised of bass strings, flutes, percussion effects, harmonicas and deep vocals that causes the listener to empathize with the music. During the 1920’s and 30’s, the blues was sang by a variety of both male and female artist. Some more popular artist are BB King,  Memphis Minnie, Ma Rainey, Muddy Waters, or even people today like Ray Charles are all notable blues singers. They each rose from humble beginnings and sang so deeply about it that everyone had to listen, even the Europeans. 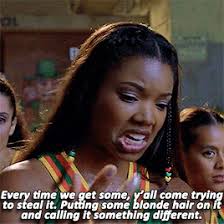 When the Europeans caught hold of delta and country blues, they immediately created their own adaptation and labeled it rock. When the European invasion occurred many blues artist disappeared and returned around the  second world war. During the civil rights era blues proved to be a prominent genre used by African Americans as a rallying call. Blues serves as a symbol for African American hardship and resilience  and Europeans seen it as an opening for appropriation and commodification. They marketed blues as rock and have continued to do so since the 20th century, but does that truly surprise you?

Blues was the foundation for rock, R&B, rap and Hip hop. Although it was appropriated by Europeans and Caucasian people, the bass strings and strong vocals still reveal its blues origin. Blues is black gold and along with our Bantu knots and Shea butter it is not up for sale!