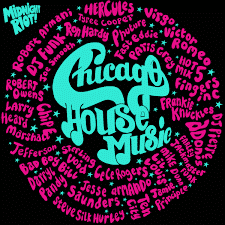 Chicago house music was created in the late 1980s. This genre was inspired by disco, hip-hop, funk and techno. DJ Frankie Knuckles is known as the Godfather of House Music. DJ Frankie Knuckles was born and raised in the Bronx, New York but moved to Chicago in the late 1970s. Since hip-hop was already on the scene in New York, we know that this must have influenced his style and music choices. Below is a link to his Discography and many examples of Chicago house music.

House music is characterized by “a repetitive 4/4 drumbeat punctuated by a high-hat cymbal and, a funked-up bassline and laser-like synthesizer riff”. It was first created and played in a club names The Warehouse. Attendees were primarily homosexual black men and everyone came to dance and have fun without fear of judgement and societal pressures. The house music as well as gay clubs inspired people to be themselves. House music was also seen as an anti-disco movement. This resentment towards disco evolved after the music market was flooded with disco music

One thing that I noticed when researching house music is that it originated around the same time as bounce music. The repetitive lyrics of house music also reminded me of bounce music. Just like Bounce music, house music was also very popular to homosexual men. This could represent how two different areas can take one style of music, hip – hop, and make it their own.

This style of music is still being created and played today. Bars in Chicago like Smartbar, Housepit and Berlin still play house music as entertainment. House music is one of those universal genres that was accepted by both white and black societies and it will contintue be an important part of the LGBTQ+ community.