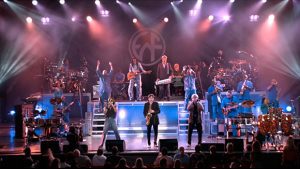 During one of their many tours and concerts , two amazing groups , Chicago and E.W.F( Earth, Wind and Fire) performed together at the Greek Theatre, Los Angeles in 2004. Chicago is an American rock band formed in 1967 in Chicago Illinois.They are mainly known for their excellent and extensive use of horns.

The concert was held in the evening and carried on till late in night. Most of the audience was on their feet, grooving to the songs performed by the bands. Both bands had a mixture of denim, black and blue outfits. E.W.Fs outfits were very disco and jazz inspired while the Chicago band wore simpler outfits. There was a lot of energy and harmony between the two bands on the stage as well as the crowd.

The performance with an opening from both bands. The songs performed included Beginnings, In the Stone and Dialogue 1 and 2. After the opening performance, each group performed individually and both bands later came back on to perform finale songs.

Earth, Wind and Fire performed first. For their solo performance, the lead singers changed their outfits from denim to a tropically inspired one. Songs performed included Magic Mind, Boogie Wonderland, System of Survival, Jupiter, Getaway, Serpentine Fire, Kalimba Story, Got to get you into my life, The way you move, Reasons, Fantasy etc.

The Songs performed by the Chicago band included Make me smile, If you leave me now,  Call on me, Alive again, Hard habit to break, Old days.

Both bands performed September, free, sing a song, shining star and 25 or 6 to 4 for their finale songs.

It was a spectacular performance by both groups and an even more amazing performance when they performed together. The energy in the crowd and among the bands was intoxicating . it was a pretty exciting performance and it was great to see both bands together.