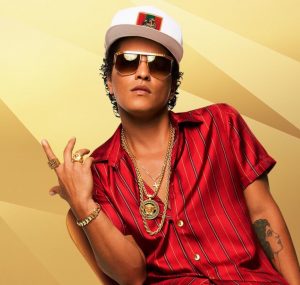 Bruno Mars was born Peter Gene Hernandez was on October 8, 1985, in Honolulu, Hawaii. He was born into a musical family who performed a Las Vegas style set to entertain tourist at Waikiki Beach. As a child he began learning the guitar, piano, and drums while also learning to sing and dance like his idols, Michael Jackson and James Brown.

In 2010, he dropped his first hit angle “Nothin on You”.By the early 2000s, he had begun to find success by writing songs for popular artists, including K’Naan’s “Wavin’ Flag.” After several years as one of pop music’s premier songwriters, Mars broke out as a singer in his own right with the 2010 hit “Nothin’ on You.” Other popular songs by Mars include “Just the Way You Are” (2010), “Locked Out of Heaven” (2012) and the Grammy-winning “Uptown Funk!” (2011