The first time [they] met the Blues was in the south as new songs were emerging in Black communities. The creativity sprung from the struggle of Blacks social and economic developments due to the Jim crow laws. From racial segregation to lynching and TERRORISM, African Americans hope of attaining the American dream died but, their talents and musical creativity sparked. There emerged the blues. Because Nobody knows you when your down like the Blues. Compared to previous music genres who had white financial support to an extent, Blue’s had a greater reliance on Black audiences for financial and audience support. This was because whites viewed Blacks as ignorant, carefree, and apart of a different social class. 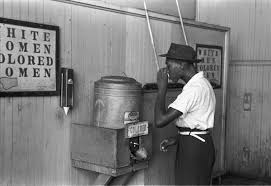 Blue’s music changed these stereotypes. Their lyrics helped challenge the negative notions. It was the Key to the Highway. Blue’s was considered commercialized music and immediately became popular in the world of entertainment and media. Blacks published, copyrighted, and performed their own music. Whites however, Can’t be satisfied with their own music. Ironically the same whites who viewed Blacks as lower than them and inferior, began taking a liking to Blue’s. Many commercially recorded “Blues” vocalists were white. White song writers began to publish “Blues” and identified what may have originated back in 1890’s as a “new” distinct type of music. Time to Get [your] mojo working, Can white’s consider their “Blues” try blues music? Blues goes beyond just having the musical characteristics. It was an experience! An experience that whites at the time did not know. They did not understand the hardships, pain, nor the Love in vain that Blacks had used to create the blues. The thrill [was] gone as the substance and depth that Blues had was not apparent in the music. Unfortunately, Blacks did not receive the recognition they deserved for their creation and the Blue’s lost some of its context and meaning. I know, It hurts me too.  A century later, more like a century too late, Blacks began receiving the credit they deserved.  We are still at a Cross road blue’s.  You have still not received the acknowledgment for being the start and influence for Rock and Roll. Soon though, it will be time to Shake Em Down and receive what is due to you.