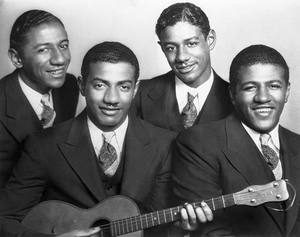 While quartets, in a social scale, would be considered white American culture, African Americans were the originators and are responsible for the boom of Black people in the media. Too be quite honest, by the end of the 19th century, black music was American pop music, or at least a huge part of American culture.

Quartets originally derived from groups singing sacred songs, however, they later began singing more secular sounds, and gave their music much more rhythm and beat. The singers may have used instruments, but it was much more likely that they used the flexibility of their voice to use them as instruments themselves. The quartet consisted of a lead, a bass, a tenor, and baritone.  A quartet can be either male or female, but they are most popular as men.  Famous quartets include the Golden Gate quartet, and The Mills Brothers.

With this new sound, of course the ~mainstream~ listeners found interest, and just like that, segregated, racist America had Negroes on televisions, shows, and the radio! Their music was accessible to everyone, and everyone loved it. It wasn’t long before the culture vultures would come and imitate, and claim quartet singing as their own. However, we should all recognize the saying, “Often imitated, but never duplicated.”