The term “blues” was used to identify a new type of song emerging from Black communities in the southern United States by the end of the first decade of the twentieth century.  New and different from formal musical characteristics, this timeless music reflected pain, sadness, and feeling blue.  Blues music seemed to simultaneously turn up everywhere in the Deep South, which suggests that the the form had been developing for years, allowing us to place its origins in the 1890s.  The blues coincided with hard white resistance to Black social and economic progress in the form of the Jim Crow laws and the institutionalization of racial segregation, disenfranchisement of Black voters, lynching and other forms of terrorism, and the loss of jobs to the swarm of European immigrants.  The Blues was often initially sung in first person, talking about hopes and dreams.  Throughout most of the twentieth century, the Blues challenged stereotypes of Black folk and led the way in the Black struggle for freedom, justice, and equality. 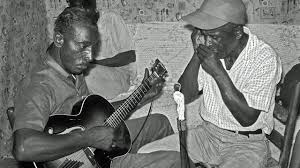 The blues was being improvised all over the South, for pleasure and for profit.  The Blues formed out of early fiddle music, slave fiddle players, and banjo players.  The Blues was played by the poorest people with whatever came handy.  The blues became commodified through minstrelsy.  New York recording studies made Blues the driving force of American culture.  In 1920, Perry Bradford scored a big hit with ‘Crazy Blues’, sung by Mamie Smith.  It launched the blues as pop music.