Billie Holiday, also known as Lady Day, lived a life of great trial and triumph as she graced the world with her moving vocals, hard-hitting delivery, and soul-touching lyrics. On many occasions, Holiday’s story is misconstrued as one of only beauty and excellence while others solely paint it as one of pain and misfortune. The truth of the matter is that Billie Holiday’s life story is a mixture of both pain and pleasure, tears and smiles. From a childhood filled with abandonment to a career of unsurpassable success, Billie Holiday became a both a source of inspiration and passion as well as a target for much hate and mistreatment. To this day, Billie Holiday is still known as a jazz pioneer, Civil Rights activist, and an all around unforgettable woman.

The Beginning of Holiday

Eleanora Fagan, more commonly known as Billie Holiday, was born on April 7th, 1915 in Baltimore, Maryland. The first name “Billie” stemmed from Eleanora’s admiration for silent film star Billie Dove. The last name “Holiday” belonged to her father Clarence Holiday who was a well known musician and guitarist. As a young child, Billie’s father left the family behind in order to further pursue his career while Billie’s mother was also found to be absent following her second marriage to Billie's step-father.  Billie Holiday’s formative years were plagued by the impact of being born to unmarried teen parents Sarah Fagan and Clarence Holiday. The typical challenges of being teenage parents was compounded by the eviction of her mother from her parent’s home and having to be raised by relatives. The multiplicity of relatives raising then Eleanora was further complicated because she did not have the opportunity to spend those impressionable years with her mother.

Because she often missed a significant amount of schooling, Billie was arrested at age 9 and was sent to Catholic reform school. Billie recalls being mistreated in the confines of the sacred walls. This experience most likely shaded her spiritual or religious beliefs, yet would later most likely have been pivotal in her using her platform for not only social entertainment but social justice. Following this misdemeanor, Holiday moved to Harlem so that she could reconnect with her mother who she had not seen in quite a while. In Harlem, Billie Holiday’s mother was found working in brothels as a prostitute. Holiday’s initial passion was to dance so when she was a few years older she began to dance at speakeasies in New York which also allowed her to support herself for a while.

At the age of 18, Billie Holiday was discovered by record producer John Hammond as she had been performing at different clubs throughout the city; the most popular being Monette’s. The first song that Billie Holiday recorded was “Riffin the Scotch” which ironically the first few lyrics “I jumped out of the frying pan and right into the fire. When I lost me a cheatin’ man…and got a no-count liar” would forecast her tumultuous personal life. Her career transitioned from singles and jazz clubs to mainstream success with major record companies at the time. Holiday recorded and released tracks with some of the biggest names in music at the time such as Duke Ellington, Benny Goodman, Teddy Wilson, and Count Basie. Holiday was bestowed the name “Lady Day” by her good friend Lester Young who was a member in Count Basie’s orchestra. Billie Holiday recorded a plethora of songs that later earned her Grammys and worldwide recognition posthumously. The song that became a forerunner; in a league all by itself was “Strange Fruit”.

The Strangest of Fruits

Billie Holiday’s career made way at the height of the Jim Crow era which meant that Billie had her fair share of racial discrimination and turmoil. While touring and performing in different shows, Holiday was booed, shunned, and even refused at venues at which she was originally scheduled to perform. Oftentimes, she was seen performing in places with segregated audiences in which only whites had full entry. She encountered much verbal and physical abuse. When Billie was approached to record “Strange Fruit”, written by Abel Meeropol, she was understandable hesitant because she felt as though it would cause a great deal of uproar, not just in the industry but all around the world. Hesitant but inspired, Billie Holiday recorded one of the influential songs ever known to the racial and civil movements. It is important to note that “Strange Fruit” was recorded and released around the same time that Gone with the Wind was released. After Billie had recorded the song , Columbia Records, Holiday's label at the time, absolutely refused to release it and many radio stations did not feel comfortable playing it. “Strange Fruit” went on to sell over 1 million copies. The song is classified as “the first significant protest in words and music, the first unmuted cry against racism” according to Leonard Feather (Griffin 2). “Strange Fruit” depicts black bodies hanging down from the limbs of trees as they've been inhumanly lynched due to the color of their skin. I would purport that Holiday did not sing “Strange Fruit” for the simple pleasure of entertaining her audience nor for the opportunity to further impact the music industry with her gift and talent. Holiday sang “Strange Fruit” for the very first time in 1939 at the Café Society, New York’s first racially integrated night club to propagate an anti-lynching platform to bring light to that which is one of the darkest periods of human history.

From Day to Night

By the close of the 1940’s Holiday earned a considerable income and was doing very well financially, however, her career was about to take a turn for the worse. On May 16, 1947, Holiday was arrested for narcotic possession. The court case was called the United States versus Billie Holiday. She pleaded guilty and served less than a year in the Alderson Federal Prison Camp in West Virginia. By the 1950’s Billie Holiday’s addiction to drugs and alcohol along with the abusive relationships she had with men started to greatly impact her health which was very evident in later recordings; revealing the damage of her once vibrant voice becoming coarser. Despite those downfalls and challenges, Holiday persevered and traveled abroad to perform in Sweden, Germany, France, and Switzerland. She also performed at Carnegie Hall in which the performance was sold out. Billie Holiday died on July 17th, 1959 in New York. The cause of the musical genius’ death included kidney, liver, and heart afflictions as well as lung damage caused by the heavy use of drugs throughout her lifetime.

Billie Holiday had a sound that was purely distinctive and although she stated that her musical talent and inspirations were mirrored after the likes of Bessie Smith and Louis Armstrong, Billie had a flavor that was only individual of herself. She has the ability to sing any song with precision and articulation. Billie was able to tell stories through her vocals and her songs. She had the ability to connect to her audiences to the point where the audience members felt like she was singing to them individually. As Cassandra Wilson put it “For all the praise that Billie Holiday gets as a vocal stylist, she’s seldom acknowledged as a musical genius. She was the first to prove that you could make soft sounds and still have a powerful emotional impact. She was understanding jazz long before Miles ever stuck a mute in his horn; she was the true “birth of cool” (Griffin 14). 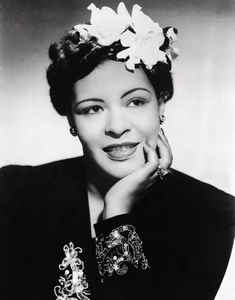 Billie Holiday
“I never had a chance to play with dolls like other kids. I started working when I was six years old”

Billie Holiday
“Singing songs like 'The Man I Love' or 'Porgy' is no more work than sitting down and eating Chinese roast duck, and I love roast duck”

Pennsylvania Center for the Book