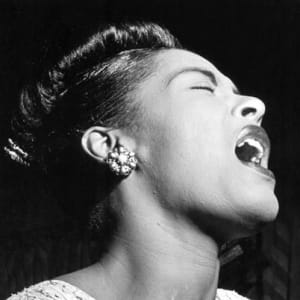 Born Eleanora Fagan on April 7, 1915, Billie Holiday is a Philadelphia native although some may argue her birthplace as Baltimore, Maryland.  Her mother had her as a teenager and her father who is believed to be Clarence Holiday, also a successful jazz musician, was absent. The lack of a stable home landed Holiday in a facility for troubled African American girls at the tender age of 9. Music acted as Holiday’s therapy. A while after following her mother to New York City, Holiday began singing in local clubs, coining the name Billie after actress Billie Dove.

Billie Holiday has a vast number of notable works but her most controversial to this day is her rendition of “Strange Fruit”. (See a timeline of her musical achievements here: https://billieholiday.com/billie-holiday-timeline/ )

FBN and Her Struggle with Addiction

As Billie was introduced to a life of fame, she was also introduced to harmful drugs. Lady Day constantly wrote about her rocky relationships in songs. One of those relationships being one she had with James Monroe who she married in 1941. While the marriage didn’t last long, Monroe’s opium addiction stayed with Holiday after the divorce. Not only did Holiday struggle with an opium addiction but also heroin and alcohol. Federal Bureau of Narcotics commisioner, Harry Anslinger greatly opposed Holiday’s rendition of Strange Fruit and order she never sing the song again but Holiday refused. As a result, Anslinger made it a point to ruin her life. Holiday was arrested and convicted for narcotics possession in 1947 spending a year in a federal rehabilitation facility. Holiday’s drug use worsened with each man she met, getting arrested again for narcotics possession in 1956. Her continued drug use took a noticeable toll on her voice.

Unbeknown to her loving fans, Holiday gave her last. performance in New York City in May 1959. Shortly thereafter, she was admitted to the hospital for heart and liver problems where she was also arrested for possession of narcotics. Holiday succumbed to her addiction in July of 1959, breaking the hearts of millions of fans across the world. She is remembered by her autobiography, “Lady Sings the Blues” and its accompanying film released in 1972 starring famous singer and icon Diana Ross as Lady Day herself. Holiday was inducted into the Rock and Roll Hall of Fame in 2000 proving her legacy lives on long after her death.