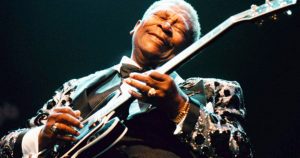 B.B. King was born September 16, 1925, on a plantation in Itta Bena, Mississippi. His parents Albert and Nora Ella were sharecroppers but he was raised by his grandmother. As a young boy he played on street corners in different towns. In 1947 he traveled to Memphis Tennessee to really begin his career. He stayed with his cousin Bukka White who taught him about the art of blues.

B.B.’s career really started in 1948 when he performed on Sonny Boy Williamson’s radio program on KWEM out of West Memphis. This led to multiple performances at Sixteenth Avenue Grill in West Memphis and sets on the Memphis radio station WDIA. In 1956, after his number one hit, “Three O’Clock Blues,” B.B. and his band began touring nationally. Over the years he became known as the King of Blues. B.B. was inducted into the Blues Foundation Hall of Fame in 1984 and into the Rock and Roll Hall of Fame in 1987. He continued touring well into his old age. On May 14th 2015 B.B. passed away quietly in his sleep.