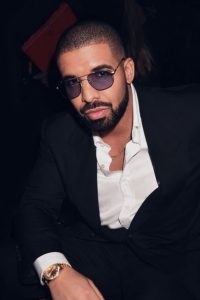 Aubrey Drake Graham is a singer, rapper, songwriter, producer, actor and entrepreneur. Drake was born on October 24, 1986 in Toronto, Ontario.  He is known for his very catchy beats and lyrics in his music. He is a singer/rapper that is constantly pushing the envelope, creating music and visuals that will be remembered for years to come. Aubrey has 8 studio albums and has been featured in numerous films and television shows. Mr. Graham has won 3 Grammy Awards, 2 MTV Awards and 13 Billboard  Music Awards. He is a member of the YMCMB Label that house artist such as Lil Wayne, Nicki Minaj and Birdman. He is also signed to Republic, Aspire and Universal Motown. He has his own record label titled: OVO Sounds where he has numerous artists such as Kash Doll, PARTYNEXTDOOR, Roy Woods, dsvn, 40, etc. He is the Global Ambassador for the NBA Toronto Raptors and has a partnership with Apple Music.