Frankie Beverly and Maze is an American soul band founded by Frankie Beverly in Philadelphia in 1970. Under its original name Raw Soul, the band relocated to San Francisco and was introduced tO Marvin Gaye. Gaye took the group on the road with him as one of his opening acts, and in 1976, he suggested that they change their name from Raw Soul. Maze released 9 Gold albums from 1977 to 1993.

The band has managed to create music that has transcended generations. Frankie Beverly and Maze has been one of the influential bands in the genres of R&B and Soul, and pioneered through the genre of Funk by producing tracks that everyone good get up dance, groove, and move to. The music of Frankie Beverly and Maze has been used at family functions, weddings, social gatherings, cookouts, and parties to bring people together and perpetuate the communal feeling of family.

In 1976, the band signed with label Capitol Records and released their debut album Maze featuring Frankie Beverly. By 1980 the band had corralled a huge following not only in America but in the United Kingdom as well. Riding the high off of fan support, they released their second album Can’t Stop the Love in 1985 which gave them their first ever R&B number one hit, “Back in Stride”. In 1989, they left Capitol records and signed with Warner Bros. While signed with them, they released their hit album Silky Soul followed by Back to Basics in 1993. Both albums reached gold  disc status and produced yet another number one hit for the band; “Can’t Get Over You”. 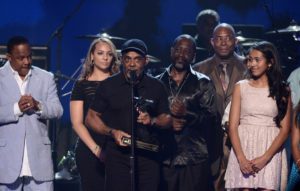 Some of their most well-known songs are:

“ The Look in Your Eyes”

“Before I Let Go”