Prior to my extensive research on Diana Ross, I could only imagine a glamorous  diva. However, Diana is known for quite more. Diana Ross is known for her outstanding works produced as a Motown artist, during both her group and solo career and her diva ways. However, Diana was dynamic in her abilities to switch genres- pop, soul disco, rhythm and blues and rock and roll making her the most successful women artist of this area.

Diana Ross is an astounded artist for uplifting women and other artists through her grace and music as a pop diva. Diana Ross was the most successful female singer of the pop, soul, rhythm and blues, disco and rock and roll era making her the dynamic women.

Born and raised in Detroit, Diana Ross became one of the most influential women singers. Diana was born to Fred and Ernestine Ross on March 26, 1944 as the second child of six. Her family lived in one of Detroit’s low income housing districts. Her close knit family allowed for Ross to grow up without knowing the harsh conditions that surround them. Diana Ross music career began as she sung in the choir at Olivet Baptist church. While being part of the choir, her cousin introduced her to secular music. Also while Diana attended Olivet Baptist Church, Diana met Mary Wilson and Florence Ballard. The original Primettes were Diana, Mary, Florence  and Betty McGlown. Barbara Martin replaced Betty McGlown. The four ladies created the Primettes, a sister quartet to Primes. The Primettes sought to get signed by Motown, however Berry Gordy believed the ladies were too young and instructed them to finish high school . In 1960, the Primettes produced their first single for the Lupine label. (Ribowsky) Two songs the Primettes recorded were “Tears of Sorrow” and “Pretty Baby.” Finally in 1961, they debuted for Motown and changed their name to Supremes.

The Supremes were the most successful female group of the 1960’s and within the top 5 pop, rock, and soul acts of 1960’s. Berry Gordy payed much attention  to the Supremes by providing detailed instruction in dance, etiquette, and singing and were closely chaperoned. (Wyeth) Gordy believed the girls could cross genre boundaries. The Supremes included Mary, Florence and Diana.  In 1964, the Supremes first number single was “Where Did Our Love Go?”.  The supremes continued with four other top singles “Baby Love” (1964), “Come See About Me” (1964), “Stop! In the Name of Love” (1965), and “Back in My Arms Again” (1965). (Wyeth) The Supremes were known for their image, a reflection of beauty and glamour. Supremes were known for black womanhood and black achievement following the Civil Rights Movement. They also were featured on a multiple TV shows and Broadway shows. Supremes recorded in several foreign languages and drew huge audiences wherever they appeared.The Supremes were also known for closing the color gap in women’s music. Also, the Supremes sung backup for Marvin Gaye and Mary Wells. The Supreme shad a successful career as they produced Meet the Supremes (1964),  Live at the Apollo (1964), More Hits (1965), The Supremes Sing Motown (1967), Greatest Hits (1968), and The Supremes Join the Temptations (1969). (“Ross, Diana”, Contemporary Musicians)

Diana also had a extremely successful solo career. Her hit singles in 1970 were “Reach Out and Touch (Somebody’s Hand)”  and “Ain’t No Mountain High Enough.” Ross was upgraded from pop singing superstar to rock and pop diva by appearing in elaborately staged performances and television specials with the help of Berry Gordy.  Motown helped to mold Ross image from “black musician” to “celebrity icon.” (Wyeth) Diana repertoire contained R&B , soul, pop, disco and jazz. During the 1970s, Ross focused on jazz and Holiday’s music, which she sung after playing her role in The Lady Sings Blues. Diana left Motown after realization that “the relationship has gone as far as it will.” Diana signed to RCA label. Immediately after signing with RCA, she released Why do fools fall in love?In 1981, her duet with Lionel Richie topped Billboard magazine’s pop rhythm and blues. In the mid 1980s, her music shifted from pop and R&B towards disco. She surprised her audience with “Love Hangover.” During Diana’s solo career, she produced Diana Ross (1970), Lady Sings Blues (1972), Greatest Hits (1976), Why Do Loves Fall in Love (1981), Swept Away (1984), The Force Behind the Power (1991), Everyday Is A New Day (1999), Life & Love: The Very Best of Diana Ross (2000) and The #1’s (2004). (“Ross, Diana”, Contemporary Musicians)

In addition to her affluent solo career, Diana enhanced herself through her acting career. In 1973, Diana played Billie Holiday in the Lady Sings the Blues. Her magnificent job earned her an Academy Award nomination for best actress. In 1975, her next film was Mahogany  which was nominated for the Academy Awards’ best song in a motion picture and topped the record charts again. In 1976 – 1977 a Broadway show, An Evening with Diana Ross performed tributes to Josephine Baker, Ethel Waters and Bessie Smith. (“Ross, Diana.” Contemporary Musician) She received extreme criticism stating that she overagerating with costumes distracts from the music. However, this is an extreme part of Diana, as a pop diva. In 1978, Diana also played the lead role, Dorothy in the Wiz. Diana bought the rights of the movie to change parts of the movie , allowing her to play an adult teacher instead of a little girl. This was a phenomenal movie that had 11 nominations and 1 award for Best Actor in a Motion Picture (given to Michael Jackson).

During her amazing careers, Diana Ross still committed to her family and friends.  Ross remained influential to her family member and friends.  Diana Ross have 5 children, Tracee Ellis, Evan Ross, Rhonda Ross Kendrick,  Chudney Ross and Ross Naess. Diana was married twice to Robert Ellis Silberstein, and Arne Naess Jr. Diana had her first child, Rhonda Ross Kendrick with Berry Gordy, Tracee and Chudney with Silberstein, and Ross and Evan with Naess. Despite the divorce and Næss’s death, Diana remains close with her three ex-stepchildren, Leona, Katinka, and Christoffer,  Ross’s integration with music and film has influenced her children Tracee and Evan as they enter the arena.

Diana was very influential to her friend Michael Jackson, another incredible Motown artist. Although she did not discover the Jackson, Motown credited her. Diana Ross met Michael Jackson at age 9. Although there is controversy over the depth of Ross and Jackson relationship, Diana helped influence Jackson and his music. They had love for one another. This love continued to be shown as Jackson gave rights to Ross as the second caretaker to Ross. Ross has also influenced other artist, especially women through her glamour and grace.

Ross returned to Motown in 1989 as a director.  Controversy took place after it was announced that Diana Ross and the Supremes would on return to Love Tour. Cindy and Wilson both rejected the invites thus making the tour unsuccessful. Diana’s legacy continues today. Diana and the Supremes were inducted in the Rock and Roll Hall of Fame. In 2016, Diana was awarded the Presidential Medal of Freedom in 2016.

Diana Ross have proven to be the most successful  female singer of the pop, disco, soul, rhythm and blues and rock and roll era. In addition to her musical legacy, Diana has a legacy for glamour, friends and family, making Diana the dynamic woman.

Joe “King” Oliver, Joseph Nathan Oliver,  is one of the most prominent figures in the jazz era. Oliver was a jazz cornet player and bandleader.

Techno: A form of dance music that emerged in Detroit in the early to mid-1980s that primarily features electronic instruments, including drum machines, multitrack mixers, computers,

What difference does it make ?

In the previous class, we compared the meaning of music today versus past musical genres that helped influenced today’s music, for instance, jazz, blues, secular

Native of Fort Worth, Texas Reared in the church by his Aunt Rebellious teen years lead him to stay in the church Close friend died 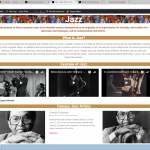