The Oh So Smoothhh Keith Sweat 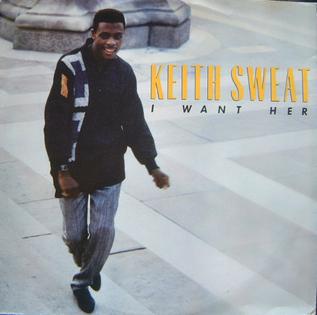 Who is the Oh So Smooth Keith Sweat?

Keith Sweat born Keith Douglas Sweat was born on July 22, 1961 in Crescent City, Florida. His mother was a hairdresser and his father was a factory worker. When Keith was 12 he and his family moved to New York. Unfortunately in 1973, his father passed away and the mother was responsible for taking care of all five children. To help his mother out he got a job after school at Macys and a job at a mail room.  After a few years Sweat received a job in the New York Stock Exchange.

He began his career in a band in 1975 called Jamilah. Through this band he was able to work on his musical craft. He was the lead singer and the crowd always loved when he hit the stage.

After he left the group in 1984 it was time for him to take off in his own way. To get himself out there he began to perform at clubs In New York City in hopes of landing a record deal. After several years of hard work he was discovered by Vincent Davis and was offered a record recording contract. This was big for Sweat because he wanted to further his career and be successful. In 1987, he released the song that we all know and love, “Make It Last Forever.” This was a love song that inspired all couples to make it last forever and to love each other. This song is still played at some functions today. His career didn’t stop here, in 1992 he discovered the singing group Silk. Silk is a R&B group that we still love until this day. As years went on Sweat continued to produce and sing songs we still know and love today.

What is Keith Sweat doing today?

Keith Sweat was married from 1992 to 2002 to the famous reality television star Lisa Wu Hartwell. Due to this union they have two beautiful sons. He also has three daughters and a son with another woman. He is the host of a radio show entitled, ” The Sweat Hotel” Radio Music. This show is about adult topics and he interviews R&B artists. It airs five days a week which gives him time to tour and do performances and appearances. I hope to hear some new music from him very soon!

What is Funk Music? Funk music was created in the mid 1960s . This genre of music can be described as jazz, soul, rhythm, and

Introduction to Techno Music Techno music originates from Detroit, Michigan during the 1980s. Techno music can be described as a blend of different black styles

Hip- Hop All Around

Origin of Hip- Hop Hip – Hop is the most listened to genre of this century. The history of rap music has its roots since

Who is the real king of R&B?

Who is Bobby Brown? Robert Barisford Brown better known as Bobby Brown was born on February 5, 1969 in Boston, Massachusetts. He had a rough

Who is Stevie Wonder? Stevland Hardaway Morris was born on May 13, 1950. He was born in Saginaw, Michigan. He was born earlier than his

History of Blues Blues was originally slave music was first hymns & work songs. It Gradually it became reworked into an original form of expression.

The Elegant and Radiant Ella Fitzgerald