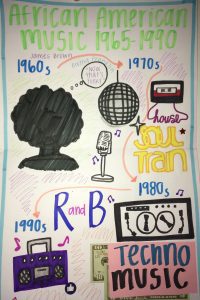 African-American music covers a diverse range of music genres created by African-Americans. The earliest forms of African American music were imported with the slaves themselves. As slavery settled into the entrenched“peculiar institution” in the South, slaves
used music to ease the drudgery of their lives, and sometimes to send messages. Music as an outlet for African Americans carried on into the 20th centuries. In the mid to late 1960s, African American music began to expand as the genres we were already familiar with increased in popularity. In the 1960s when African American musicians created a new form of music through a mixture of soul, jazz, and blues music, funk came about. The genre began to grow with James Brown’s development of a signature groove that emphasized rhythms, As a musical style, funk reveals the resilience and creativity of African Americans under changing social and economic challenges. As seen in the picture, the afro silhouette highlights the styles that featured funky music. Women and men would wear their hair in afros, accompanied by a bright outfit. Funk music began to gain its popularity in the 1970s, just when disco and house music took off. Disco is a musical style that emerged in the early 1970s from America’s urban nightlife scene, where it originated in house parties, reaching its peak popularity between the mid-1970s to and early 1980s. It’s hard to deny that a disco ball isn’t one of the most popular party symbols, given that there was some sort of disco symbol on every episode of Soul Train. The disco ball emphasizes the action at a disco. Moving forward to the 80s, African Americans introduced House and Techno music. House music is a genre of electronic dance music created by club DJ’s and producers. in the early 1980s. Techno is also a form of electronic dance music introduced in Detriot, Michigan shortly after house music. Although the two are very similar, house music has more of a melodic tune, whereas techno is very percussive, with a futuristic sound. Both house and techno music use electronic sounds throughout, hence the tape and soundboard on the picture. In the early 90s, R&B and Hip-hop music grew tremendously. Although R&B dates back to as early as the 1930s, we saw many new generation artists adopted the style. Hip Hop is a civilization that has been evolving for decades, now in the 21st century we see so many different styles of hip-hop. From the boombox to trap music, hip-hop is a staple in the African American community. African American music styles and genres have made so many contributions to music today, and serve as a major influencer.