In the 1940’s and 1970’s, a new form of Black dance music began. This newfound music comprised of elements of jazz, blues, gospel music, and pop. This became known as “rhythm and blues”, or R&B for short. R&B was originally used as a tool for modifying and minimizing African American music. As African American communities continued to face racial oppressions and other inequalities such as Jim Crow laws, the emergence of a vibrant and uprising form of music came about. During 1940-1960 rhythm and blues artists began to perform in juke joints, bars, and clubs. R&B spread across the country from Los Angeles to New York City as it became more “stylistically diverse.” R&B had the ability to adjust to the environment of any Black community. The Civil Rights Movement gave way to an integrated rhythm and blues group known as Booker T & the MGs. Their blending of unique southern sounds led to the formation of what was known as the Memphis sound.

Disco, also known as house music, originated during the 1970s in New York City. Techno originated in Detroit during the early 1980s. This music comprised of guitar driven beats, electronic synthesizers, string sections, horns, and electronic drums. They also incorporated synthesizers, keyboards, drum machines, and samplers. Disco and techno music often are associated with the gay and minority communities. With the popularity amongst these communities, this type of music was able to DJ’s more popular. Because of this, live bands were unable to keep up with the production of disco music. This music gave people the opportunity and space to be their true authentic selves, without regard for anyone else’s opinion.

Funk is an urban form of dance music that emerged in the late 1960s and became popular in the 1970s. The creators were rhythm and blues and jazz musicians. Funk borrowed elements from a wide range of genres including rhythm and blues-styled horn arrangements, jazz-oriented solos, rock-oriented solos and guitar timbres, and vocal stylings associated with soul music. Funk was created during an era of changing social and economic conditions.The lyrics of funk reflect the struggle for racial equality. Themes such as “party” and “hang loose” exemplify nationalist messages that communicate a revolutionary spirit, an urban attitude of defiance, and their symbolic call for Black solidarity associated with the Black Power Movement. The term “funk” captured both the complex and contradictory feelings of optimism, ambivalence, disillusionment, and despair that accompanied the transition from a segregated to a post-civil rights society. To the Black community, funk became an expression of cultural liberation and musical experimentation.

During the mid 1960’s is when soul transitioned and later became popular in the 1970s. The traditional topics sung in soul music was and still are based on romance and social relationships. Although, soul was widened to bring social awareness to the political and social injustices inspired by Civil Rights and Black Power movements. The mid-1960’s soul music, added negro spirituals, gospel music, rhythm and blues to freedom marches and sit-ins. The word “Soul” in the Black community became a term associated with ” blackness”. The decade between 1950-1960s, soul songs by Black people were often stolen and recreated at a slower pace songs by white people. Especially in Detroit and other capitals that were important to Black culture, white record labels and artists often looked as blacks as a easy target. 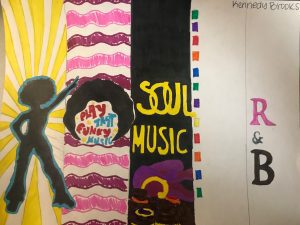 My poster is a depiction of all of these musical genres in their primetime. I think it is important to realize to that most of this music was developing and popular during the Black Power Movements. I wanted to give each genre the illustration they deserved. While disco reminded me of a disco ball, bell-bottomed jeans, and that one certain dance, I knew R&B could not have the same bright colors and feeling that disco served. What I love the most about my poster is the variety. With each musical genre, you are able to easily tell the difference between them. That is what I love about representation.