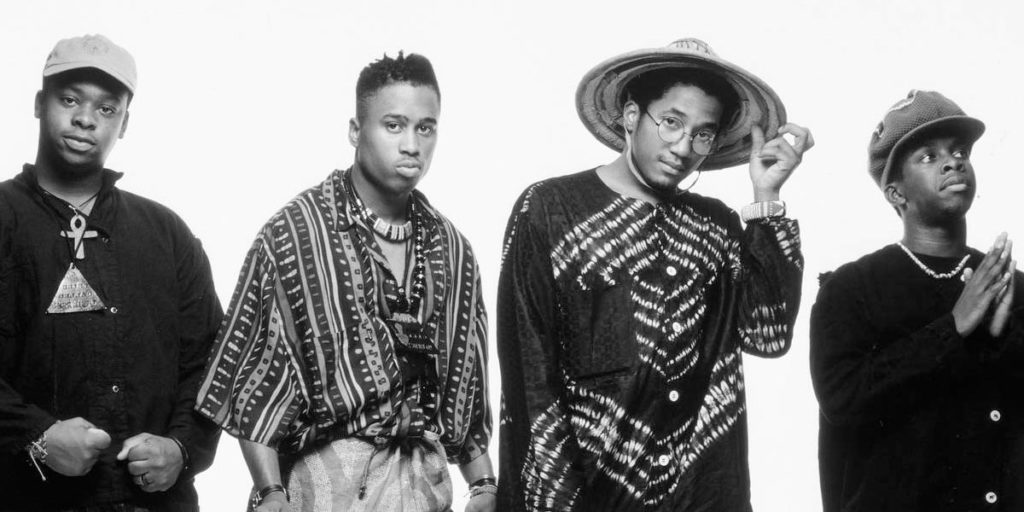 A Tribe Called Quest is a male hip hop group that originated in Queens, New York in 1988. The group had 4 original members; Q-Tip, Ali Shaheed Muhammad, Jarobi, and Phife Dawg. Q-Tip was born Jonathan Davis in April of 1970, but then later on changed his name to Kamaal Ibn John Fareed when he converted to Islam. He has been rapping, singing, producing, DJing, and acting since 1985. Ali Shaheed Muhammad was born August 1970 in Brooklyn, New York and has been an active rapper, DJ, and producer since 1988. Jarobi White was born in July of 1971. He was an orginal memeber of A Tribe Called Quest, but did not rap on any of the songs. He came up with the ideas for the songs and was in a few music videos, but in 1991 he left to pursue a career in culinary arts. Malik Isaac Taylor, or better known on the stage as Phife Dawg, was born in November 1970. On March 22, 2016 Phife Dawg passed away at 45 years old due to diabetes complications. Q- Tip and Phife grew up together in Queens, New York. Around age 11, Phife met Jarobi in his neighborhood and they instantly clicked. Later on Phife introduced him to Q-Tip and they all began making music together. The group was completed during high school when Q-Tip met Ali Shaheed Muhammad and brought him into the hip hop group.

A Tribe Called Quest began their career with releasing their first single Description of a Fool after signing with Jive Records in 1989.  Their debut album People’e Instinctive Travels and the Paths of Rhythm was released on April 17, 1990. It included 14 songs including Bonita Applebum, Can I Kick It?, and I Left My Wallet in El Segundo. After the album Jarobi left the group to pursue other passions. The groups second album The Low End Theory was released on September 24, 1991. It included 14 songs including Scenario, Jazz(We’ve Got), and Check the Rhime and its leading single. The group has  five other albums; Midnight Marauders, Intermission and The Ummah, Beats, Rhymes and Life, The Love Movement, and We Got It From Here… Thank You 4 Your Service. The group broke up shortly before releasing The Love Movement and when it was released it was announced that it was going to be their last album. In 2006 the group got back together and toured the United States. In 2016, they released an album titled We Got It From Here… Thank You 4 Your Service with Epic Records, which was incomplete when Phife Dawg passed away suddenly in March of that year.

A Tribe Called Quest was nominated for 4 Grammy’s, but unfortunately never won one. Their first Album People’s Instinctive Travels and the Paths of Rhythm reached position twenty- three on the weekly US Top R&B/ Hip-Hop Albums in 1990. Their second album The Low End Theory was rated number two in Ego Trip’s Hip Hop’s 25 Greatest Albums by Year 1980-98 for the year 1999, number thirty- two in Spin Magazine’s Top 90 Albums of the 90s in 1999, and number 154 in Rolling Stone’s Best 500 Albums of All Time in 2003. Their album Midnight Marauders was ranked number one in Billboard’s weekly US Top R&B/Hip- Hop Albums in 1993 and ranked twenty- four in the year- end  charts. Their so called final album The Love Movement received Gold from The United States Recording Industry Association of America.

I grew up listening to a lot A Tribe Called Quest’s music because they are one of my fathers favorite bands. I love their music because it is not like hip hop and rap artists today where you can’t understand what they’re saying. You can actually understand their music and there’s meaning behind the words. You can tell that music was their passion and that they made it for their own enjoyment and not for the mainstream media.