Chicago is a city that marches to its own beat. Comfortably situated in the Midwest, Chicago has produced several musical greats, no matter the music genre. It is a city as diverse as the musicians that call it home. It was this energy that influenced one of the pioneers of the electric reinvention of blues music, Big Bill Broonzy, who moved to the city in the 1920s. Big Bill Broonzy helped unite two genres of music (blues and electric) and, while doing so, influenced generations of musicians in all genres. If Big Bill Broonzy had not moved to Chicago, his music and career trajectory would not have followed the same path.

Who Was Big Bill Broonzy?

Big Bill Broonzy is considered by many to be one of the greatest American blues musicians of all time. Not only was he seen as a “father figure” to other blues musicians, but he is also considered as a musical influence on other musicians in different genres, such as Eric Clapton and Pete Townshend. He was an accomplished guitarist who knew how to perform, making him a beloved entertainer to all. Yet, his leading talent was his ability to change with the times and adapt to other musical styles in a time when many people didn’t experiment with combining different genres of music.

Big Bill Broonzy moved to Chicago, the city that would change him in the 1920s. Throughout the 20s, he became known for his acoustic country blues. In 1927, Big Bill Broonzy was able to make his first recordings under his own name for Paramount Records with John Thomas. In his earlier recordings, he stayed true to the genre he was known for and recorded primarily country songs laden with acoustics. 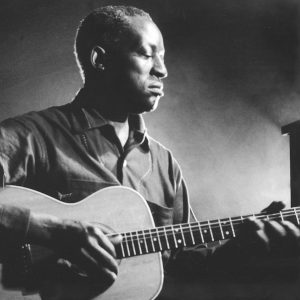 Big Bill Broonzy, in the 1930s, began to experiment with instruments. He started adding in piano, bass, and percussion instruments to his songs, creating a new and more modern sound grounded in the blues but took influence from ragtime, jazz, and other genres. Essentially, he created a new genre of blues, called proto-electric blues, that was better suited for people who lived in cities rather than the country, displaying how Chicago’s environment influenced his music. Furthermore, it was this creation of a new genre that cemented Big Bill Broonzy as an artist and performer.

Still, a chameleon isn’t able to change colors once. Big Bill Broonzy, owning up to being a musical chameleon, continued to evolve his music and career into the 1940s and 1950s. In a move that led to the creation of one of his biggest and most memorable songs, Big Bill Broonzy catered to the young, White demographic in Chicago that was enamored with folk music. He also took a cue from other musicians who were using music as a medium for social protest or change. Being inspired by all of the external factors found in Chicago, he created his song “Black, Brown and White Blues,” which was his entrance into the genre of folk music. Although it wasn’t received warmly by Black audiences, it became a hit with the White demographic, once again displaying his musical versatility and reach.

Listen to some of his songs here...