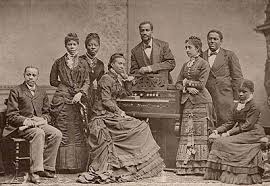 The Fisk Jubilee Quartets are widely known for their four-part harmonies commonly sang in  a cappella who introduced negro spirituals.  They attended Fisk University which was established in 1866 as a school for African Americans formally known as the “Fisk Free Colored School”. It was the first American university to offer Liberal Arts to young women and men of color.  George Leonard White, a white man who served as the school’s treasurer and choir director at the University organized a student choir of nine members as a result of a serious financial crisis.  To save the school, the Fisk Jubilee went on tour hoping to raise money which resulted in a huge success.  With the money raised, Fisk was able to buy the land that it sits on to this day.

The Fisk Jubilee Singers traveled on their first tour on October 6, 1871.  Some of the early audience responses were not as inviting as the traditional Minstrel Shows performed by black singers.  However,  one of The Fisk Jubilee’s first public performances was on November 16, 1871 at the Oberlin College in Ohio where they performed in front of a national convention of ministers. After a few selections, the audience was silent yet in awe of the beautiful sounds of harmony from the Jubilee Choir.  Departing from the black minstrel genre of white performers in black face, the voices of the group became widely recognized and praised. They were able to break the racial barriers of the 19th century by changing views and attitudes of white audiences. George Leonard White felt the choir’s gesture of hope and decided to name them The Jubilee Singers.  He referenced it to a verse in the Bible, “The Year of the Jubilee” Leviticus – Chapter 25.   To commemorate the original Fisk Jubilee Singers, Fisk University celebrates October 6th each year as “Jubilee Day”.