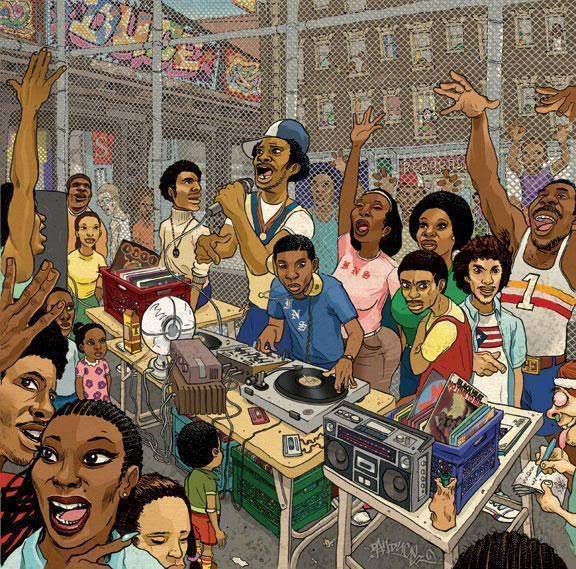 “Hip hop is the voice of this generation. Even if you didn’t grow up in the Bronx in the ‘70s, hip-hop is there for you. It has become a powerful force. Hip-hop binds all of these people, all of these nationalities, all over the world together.”

Amidst the late 60’s and early 70’s, the presence of Disco music was very popular within the African-American community, Using influences of disco, funk, and soul, the youth birthed the beginning of a new era: Hip Hop. The invasion of major poverty, gentrification, and reoccurring racial tension in southern bronx, New York, forced the grand formation of a culture that has defined the creation of black stardom and unity in modern times. The 1970’s era of the Hip Hop genre was one of the most influential periods in modern African-American music because it marked the establishment of black unified musical expression and culture that continues to be present in today’s youth. 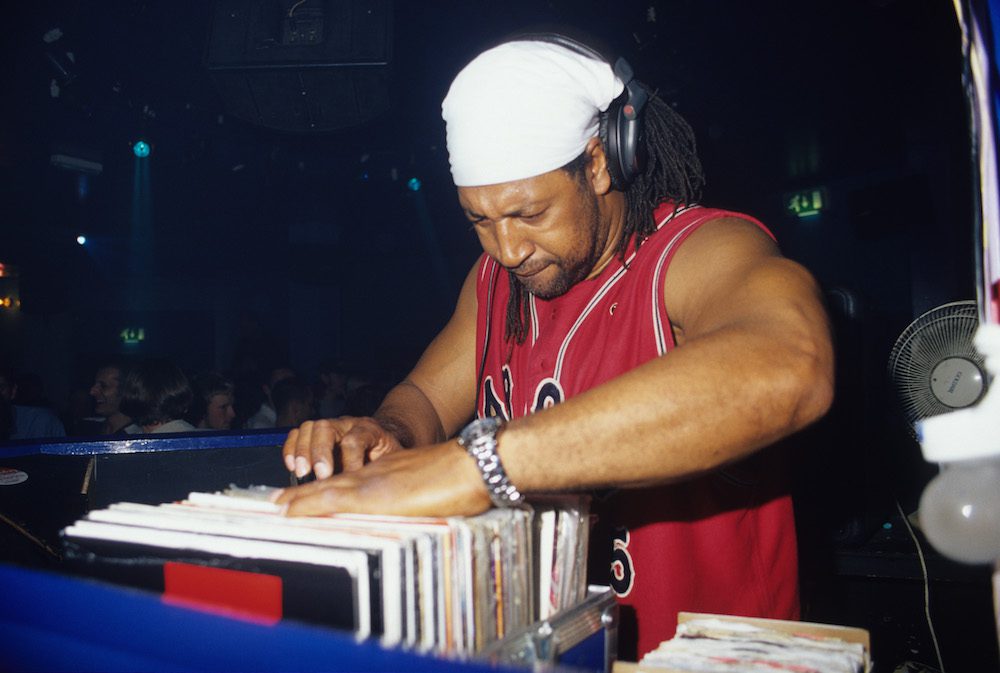 The hip hop artists in this era were pioneers, in which they were the first to produce the sounds of the genre. In 1970, The Last Poets emerged with their debut album. The Last Poets were a group composed solely of spoken word artists. Their art served as a precursor for rap music. In 1971, Baby Huey and The Babysitters released a record that would be very influential in the development of Hip Hop music. In 1972, DJ Hollywood introduced the use of turntables and the use of the mic. In 1973, DJ Clive “Kool Herc” Campbell hits the Hip Hop scene cultivating and creating its unique sound by focusing on capturing the break section of a song. He popularized this sound by hosting block parties in the Bronx, NY. In 1974, we see a movement within the hiphop community with the debut of artists such as Afrika Bambaataa, Grandmaster Flash, and Grandmaster Caz. Bambaataa is most popular for forming a group of graffiti artists and breakdancers better known as the “Zulu Nation”. Grandmaster Flash was the first DJ to actually lay hands on a record and manipulate it. He invented the quick mix theory which enabled djs to create their own beats. He promoted the concept of rapping by allowing emcees to perform over his beats at block parties. He eventually began his own rap group called Grandmaster Flash and the Furious 5. In 1976, DJ Grand Wizard Theodore established a new form of DJing that consisted of scratching a record under the needle. In 1977, breakdancers Jojo and Jimmy D formed The Rock Steady Crew, and graffiti artist Lee Quinones makes his debut with murals on basketball courts and subway trains.  In 1979, the first commercial rap song is recorded by the Sugar Hill Gang called Rappers Delight. This was the first rap single to become a top 40 hit on Billboard’s top 100. 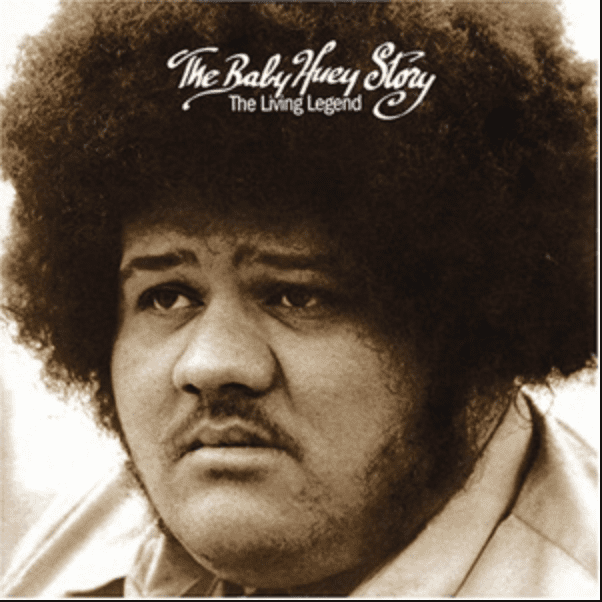 Typically whenever you hear rap and hip-hop, you may automatically assume they are exactly the same. This is because people often use the genres Hip-hop and Rap synonymously but they are different. Hip-hop is considered a culture whose 4 main components include DJing, MCing, graffiti, and dancing(particularly “B-Boying” aka Break dancing). Rap is actually a sub-genre of hip-hop that developed from the culture and style that hip-hop inhabits. Rap eventually developed into content that was developed to be published commercially while portraying unrealistic expectations and lifestyles. In KRS-ONE song “Hip Hop vs. Rap,” he states that “Rap is something you do. Hip-Hop is something you live.” This is a perfect example of the true realities of each genre.

Since Rap is a sub-genre of Hip-hop, they will have similarities. Hip-hop was established on the basis of dismantling oppression and shedding light on their current situations. Just like Hip-hop, Rap is known to do the same(when first established) but Rap is currently more susceptible to corruption due to its superfluous corporate America involvement and commercialism that causes the difference between the two’s acceptable forms of music being promoted. 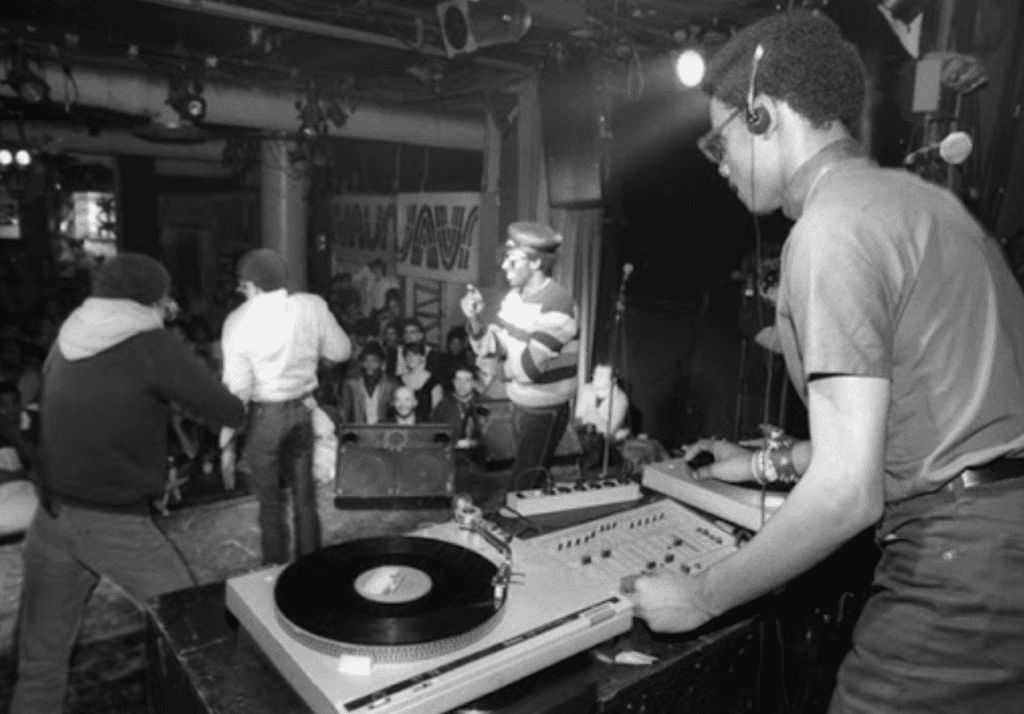 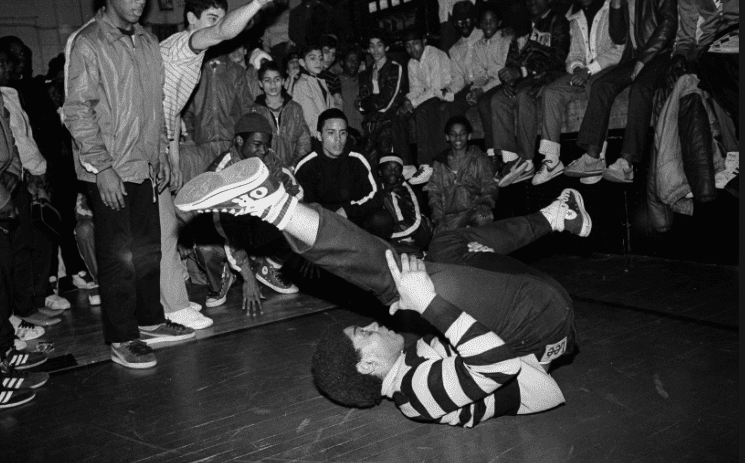 Hip hop started in the 1970’s in new york, Bronx neighborhoods. It consists of some elements like Dee-jaying, rapping, grafftti painting, and mcin. But what influenced this type of style? Like early styles of music, hip hop in the 70’s utilizes the notion of storytelling. You could see that in earlier music genres like folk. Folk music utilized this heavily and it has used call and response. Call and response and the use of funk as well ultimately formulated hip hop music in the 70’s.   The characteristics of funk became the most common rhythm used in 70’s hip hop.

“Here comes the judge” is considered one of the first rap song which utilizes the funk style rhythm that was commonly used in the 70’s era of hip hop.

Shows the development of hip hop in the 70’s.

Cultural Impact in the U.S and Abroad

1970s Hip Hop gave destitute societies in America an outlet of expression. Dj Herc’s and many others creation of this musical movement gave birth to a future platform of black celebrity wealth, influence, and culture. Hip Hop culture has contributed to American consumerism, in which materialistic wealth and appearance became essential.

Many of the youth would buy turntables and old records to begin scratchin’ and creating their own beats to MC to. Record stores were already a phenomenon in the late 60s, but when Hip Hop came around, record sales increased significantly. Hip Hop took time to spread across the United States after New York, meaning there was no international impact just yet. However, the creation of MCing in the 1970’s  over beats took over the world. 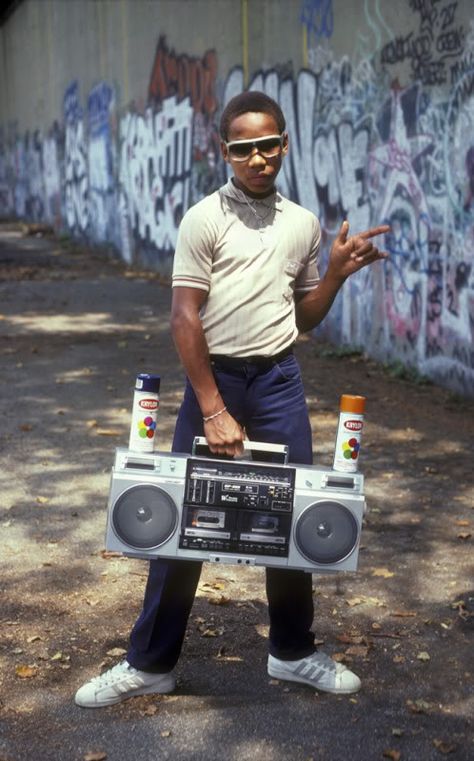 Not many hip hop songs were released in the 70s because during this time the hip hop sound was just being found. It wasn’t until 1979, when the breakaway hit “Rapper’s Delight” was released by the Sugarhill Gang, that record producers took note of this new musical genre.

The well-known TV show “Soul Train” began to flourish in the early 1970’s, showcasing black music, fashion and dancing. The 70’s Hip-Hop-styled dancing was known as street dancing and break dancing. Break dancing originated in New York in the early 1970’s, just around the time that Soul Train began broadcasting, which gained the attention of viewers world-wide. It is said that DJ Kool Herc created the term “break-boy” for the dancers that performed during his gigs.

DJ’s would have breakdown sections during their performances, which provided a “raw rhythmic base for improvising and further mixing, and it allowed dancers to display their skills during the break”. Breakdancing is an energetic form of street dance that includes intricate body movements, coordination, footwork, back and head spins. It is also the oldest known hip-hop style of dance (The Editors of Encyclopedia Britannica). Many dance groups that evolved during the 70’s such as The Rock Steady Crew (1977) incorporated breakdancing in their routines and helped to bring great attention to this type of dancing. 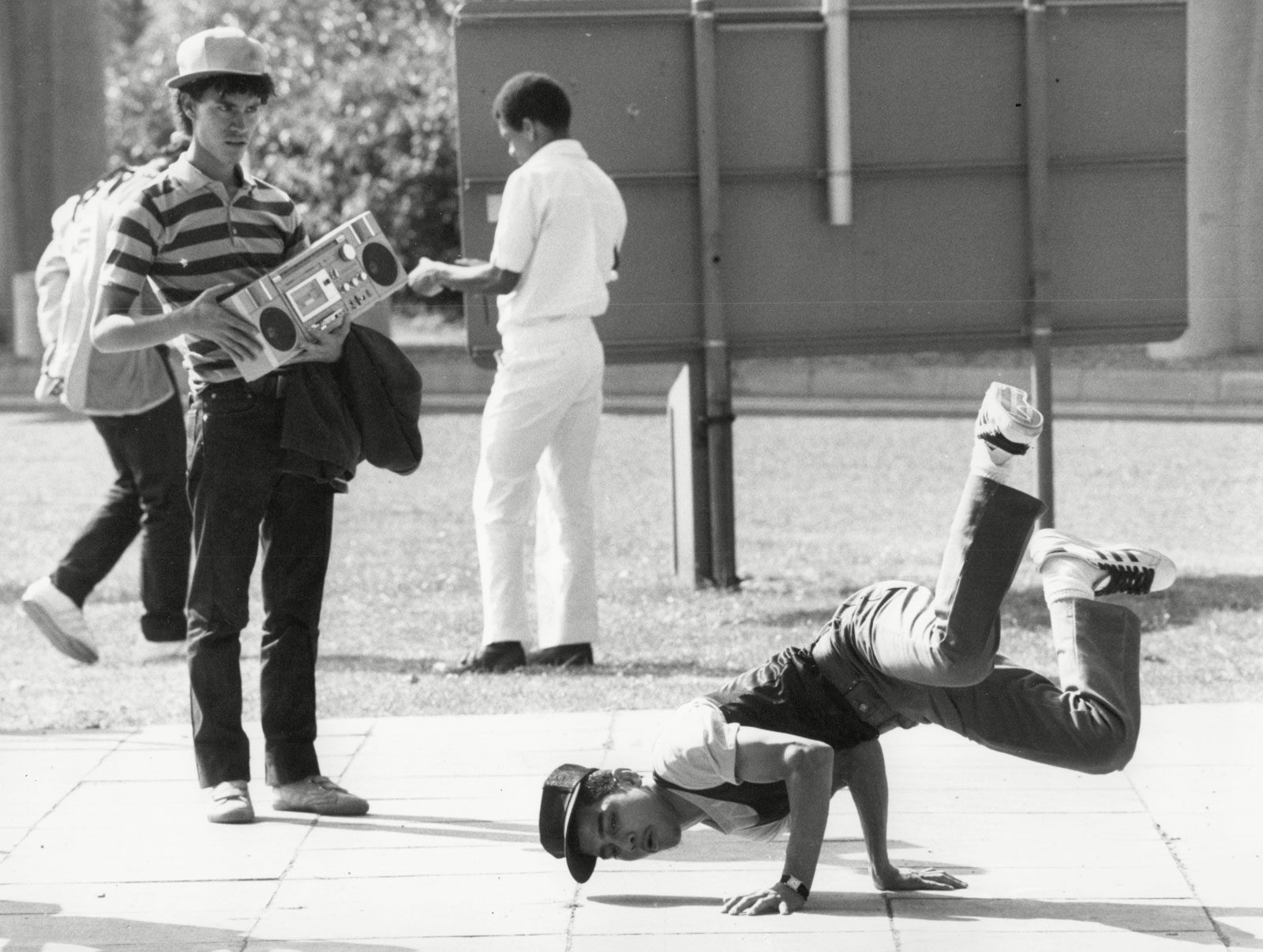 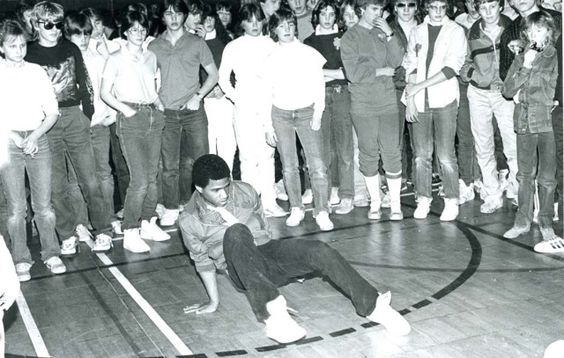 In Kingston, Jamaica, DJ’s would load up a truck with a generator, turntables, and speakers and set up for street parties, playing local reggae music and watching the people enjoy the sounds of music. This kind of scene went on to inspire a young DJ Kool Herc and his creation of HipHop styles when he moved to New York. He brought the sound system ideas to local parties, playing all the popular records and used a technique called the “Merry-go-round”, where he extended the break sections by using two copies of the same record and two turntables. Grandmaster Flash, who was heavily influenced by DJ Kool Herc, then went on to invent the concept of “mixing”, which used two different records and headphones. He was one of the founding fathers of the unique sounds of Hip-Hop. He invented many of the scratch-mixing sounds that evolved the sounds of Hip-Hop. Grandwizard Theodore was another significant influence to the Hip-Hop sound. He went on to create “scratching” (1975), which he did by moving the records during his break mixes. It was said that he discovered scratching accidentally when he got startled by his mother yelling at him to turn his music down. He placed his hand on the record in order to mute the noise, then noticed an interesting sound that came from the back and forth movement of the record which then became known as scratching. 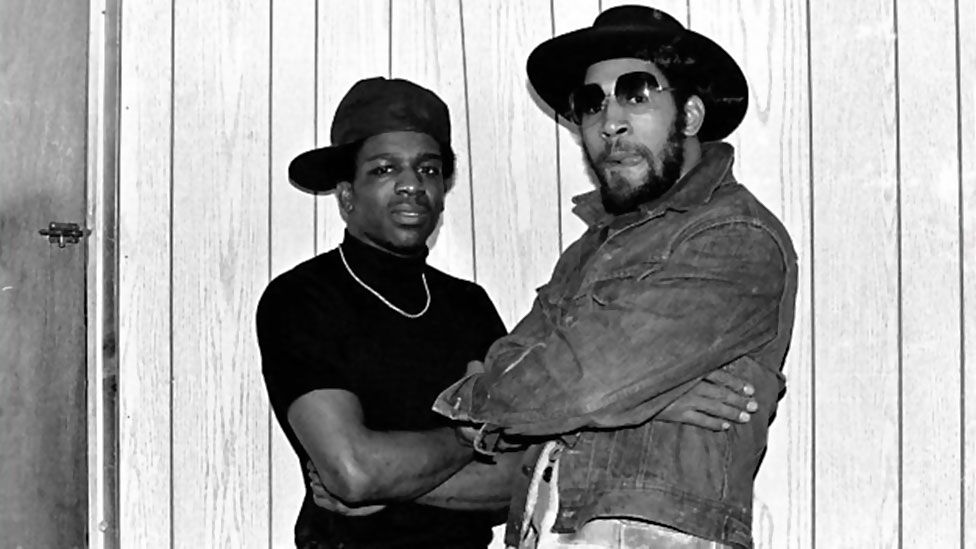 1970’s Hip Hop has been influenced by early African American music. This early African American music has influenced elements such as dee-jaying and rapping. Music artists like the Sugarhill gang and DJ Kool Herc are just some of the musical artists to establish the 70’s era of Hip Hop. Hip-hop started out as an outlet for many citizens who lived in the Bronx. It changed many of their lives and has gone on to change some of the unfair and harsh treatment of minorities in America. Overall Hip Hop has become an established part of the music scene.